An Ode To The Oreo 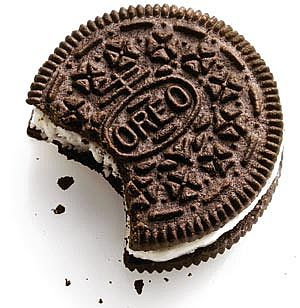 So this morning when I woke up I opened up my 90 calorie Fiber One brownie only to find an Oreo cookie stuck to the top of it.  Think I'm joking? Here's the proof...

I suppose this beats the time I found a spider in my unopened water bottle.  I have a photo of that too but I will spare you.  I think the universe was trying to tell me something.  Or maybe some sicko at the Nabisco factory thought that this would be a hilarious joke to play on someone trying to diet.  Either way, you know the brownie was toast and I helped myself to some Oreo's instead!

Though I hadn't intended to write a post entirely on the greatness of Oreo's, while on the topic I feel so inclined. In my house, (I am probably not going to win any parenting awards for admitting this openly) Oreo's are basically like a food group.  We are never without them, seriously.  My kids are pretty healthy eaters and I try to push fresh foods over packaged, blah blah blah, but Oreo's are simple perfection.  Not too rich, not too heavy, not too sweet.  Perfection.

Just a couple of weeks ago I was chopping vegetables for a salad in the kitchen with Ruth.  After each one was finished she asked for a taste, made a funny face, spit it out and we moved on to the next.  After a few attempts I said, "Don't worry Ruthie, we will keep trying until you find something you like."  To which she replied without hesitation, "I like Oreos."  Can't argue with that.

We generally have the Double Stuf on hand (I seriously can't believe this is my post, and yet I feel the urge to press on) but occasionally we buy the Golden Oreos.  Thinking we were being all sorts of cool we bought her the Heads or Tails (half chocolate, half vanilla).  I ended up having to make my own "all chocolate" ones for Ruth who let me know that a black and white Oreo is "ahsgusting!" (Daddy was the happy recipient of the "homemade" vanilla ones).

Got a case of the Mondays? Eat an Oreo.

PS I forgot to mention that we additionally really like the mini Oreo's in the Snack Pack container. (Just had to share).
Posted by Alana Bell at Monday, April 04, 2011