Master of My Domain: The Headboard Redo


Last week was a small victory of sorts.  After months of pouring over Pinterest, planning, discussing, thinking, and talking (mostly to myself) about redoing my bedroom, I finally started the process.

I moved into my house ten years ago, and upon arrival I made some alterations.  I painted a bit, furnished a little, and generally sprinkled some finishing touches all around the house.  Everywhere that is, except the Master Bedroom.  I suppose I felt that since no one else really sees it, making it super pretty and fancy was a waste (am I alone in that?).  Then I realized -- I'm someone!  I see it! And isn't that enough?

So just a little over two months ago, when my baby moved out of the Pack n Play and into her own room, I turned the "my baby isn't a newborn anymore" blues into the "I must makeover this bedroom ASAP" energy.  This event occurred only after I labored intensely over designing a shared unisex bedroom for my two older kids (I swear that labor was harder than actually birthing them and involved my husband driving to an Ikea in Baltimore and back in 12 hours for some out of stock items!).  The result of those efforts will be saved for another post.  Feeding off of that momentum, however, and the resulting feeling I got from doing it, I was set to start on my own space.

But lets get real.  With every expense out there, bedroom furniture falls pretty low on my list of must haves at the moment.  Still, my current stuff is awful.  Like as in really, really awful.  The people over at Martha Stewart and Houzz have nightmares about this kind of stuff I'm sure.  Maybe its the reason I don't sleep at night?  I really should stop blaming the kids!

I really can't be sure in what momentary lapse in judgement I picked this bedroom set...but judge for yourself on its accompanying headboard.

Apparently I had very bad taste.  Are you ooohing and ahhhhing over the inlaid triangles?  And aren't the brown sheets the epitome of style with that bed spread?  The iPhone picture quite honestly doesn't even do this gem of a home furnishing justice because you can't see the beautiful shellack it has.

And yet, amidst the questions of, "how the heck did I ever buy this?", I felt there was something there. Something salvageable.  I will say that the transformation even took me a bit by surprise.  Its not that I couldn't picture how good it could look, I just wasn't sure I could do it.  I actually told a friend about this project half way through the process.  I remember saying, "If it works out you'll see it on my blog, if it doesn't you will never hear about it again!"

In my opinion it worked out, and the results far outweighed the effort.  So here's the play by play for anyone interested in tackling an ugly headboard all their own:

First, I found the fabric.  I find that 99% of the time for me fabric is where its at.  One pillow, curtain, or bolt of well designed fabric is all it takes to design a room.  I found mine at Ikea.  You may be surprised but Ikea is an invaluable resource for fabric.  For $6.99/yard I bought three yards of this.

Then I sourced my materials: foam, nailhead trim, batting, paint, varnish remover, and a staple gun.  Part of what I think worked well for me was that I literally went to the source for my materials.  I convinced the owner of a warehouse that only sells to professional upholsterers to let me shop direct.  I picked my own materials from the warehouse and asked the owner for some pointers.  Next, I got my batting from a local upholstery house whose owner confirmed that my plan was solid and also sent me to the paint store down the block for a special product to remove the varnish.  (I would have never known such a product existed otherwise and this easily saved me at least half an hour of hand sanding).
Lastly, I brainstormed the whole thing with my partner in crime, my Dad (AKA Zaidy).  Then we got to work:

We stripped, sanded and painted the trim.  I didn't waste time on the center since it was getting covered up anyway. 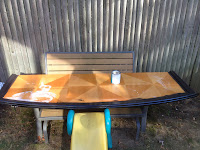 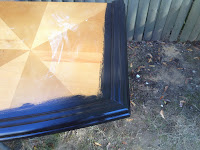 Next, we used spray glue to adhere the foam and stapled a layer of batting.  I used a 1" foam and 1" batting because I was afraid anything thicker would make getting a smooth edge around the molding difficult.  My dad and I were actually too in the zone to stop and take pictures, but thanks to my three year old roving photographer, these few gems were captured unbeknownst to me: 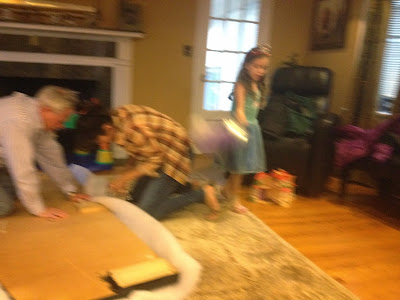 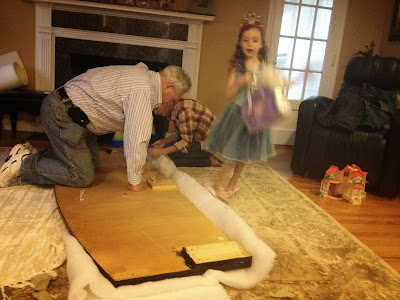 I actually really appreciate having some actual evidence that I really made this.  Note the plaid shirt and ripped jeans.  In my mind dressing the part thats half the battle.

We laid it out over the fabric, wrapped and stapled (as seen above).  We stapled the batting and fabric in two separate steps.  I got this tip from the upholsterer.  At this point we made the fabric sit snuggly around the whole piece.  We then went in and stapled along the edge of the molding, leaving enough room for the nail head trim, which we then tacked down. 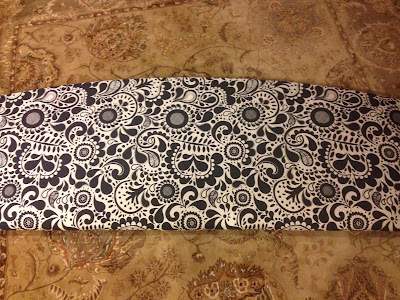 Then we cut away the excess fabric and viola! 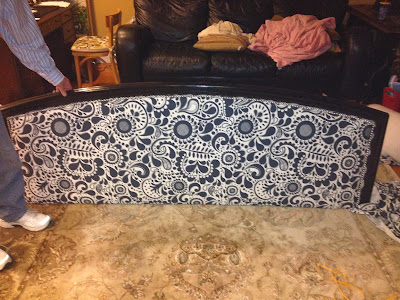 I am still shocked by the transformation.  All total this project cost under $100 in materials and took about two and a half hours to complete. Truth be told the design for the room actually began with a bedding purchase I made about three years ago (I told you I always start with fabric), so the bedding pictured above is not the final result.

This little "win" has given me the jolt to move onto the next bedroom project.  I can honestly say that taking my time and asking professionals for pointers was a big part of my success.
Lesson learned: Don't be afraid to ask, and don't be afraid to try!

I finally found great post here.I will get back here. I just added your blog to my bookmark sites. thanks.Quality posts is the crucial to invite the visitors to visit the web page, that's what this web page is providing. cool companies names